You are here: Home1 / Books2 / Fiction3 / A loving, faithful animal 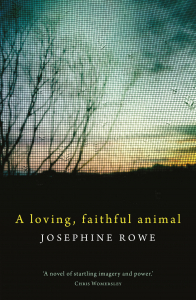 Rodney Hall, well-known author and friend to many in Bermagui, recommended this author as one of the most exciting he had read for years—a great boost for an emerging writer. She has previously published a book of short stories, which were strongly acclaimed. As a fellow at Stanford University in California, she completed this book which went on to be long-listed for the 2017 Miles Franklin Award.
Based on her father’s life, the short novel tells the story of a young man, Jack, conscripted to fight in Vietnam. It vividly describes the emotional aftermath of the War, and the intergenerational effects his experiences have on his children. The story opens on New Year’s Eve, 1990, when Jack (the father) disappears, leaving Ru, the daughter and narrator, to face the conflicting loyalties she feels for him and for her mother. Also struggling with conflicting loyalties is Les, Jack’s brother who takes on some of the family responsibilities abandoned by Jack. The saddest character is Jack’s wife, Evelyn, who for years believed that she could help her husband return to the man he was before being catapulted into a world of violence and horror.
This work is only a little more substantial than a novella, but the writing is so powerful that Josephine Rowe has captured a chapter in our history gradually fading from the collective memory, but one which continues to shape the lives of thousands of family members. A really exciting new author whose future books will be eagerly anticipated.

A Legacy of Spies