You are here: Home1 / My Triangle2 / Diana Holmes, card shark 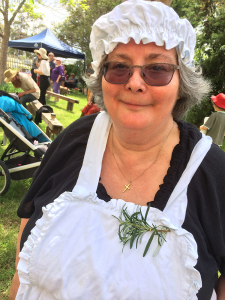 I’ll never forget the first time I met Diana Holmes. It was Fair day at the Quaama Hall and as part of the QPA, I was busy putting out lunch from the Hall kitchen. Suddenly there was laughter and lightness and I turned around to meet Diana, up to her elbows in soapy water, not just with a smile but with a sparkle and cheer that was absolutely infectious.

Di’s now a familiar figure around the Triangle area. She volunteers everywhere! You’ll find her in the Bowerbird Op Shop on Mondays, at the OK Shed in Bermagui too. She’s a big contributor to the Cobargo CWA and is on the Quaama Progress Association committee. When she’s not volunteering, she is off to the Quaama Ladies group, the Quaama Singers, a game of tennis (with special big red tennis balls) or a poker game at the Bermagui Country Club (more on that in a sec!).

Diagnosed in 1975 with a rare degenerative eye condition, Di is legally blind and what sight she still has is getting worse with time. This reality has given Di a focus on the present and she does as much as she can with the time she has, throwing herself into whatever gives her joy. And that means people. She loves her friends and family and the community that supports her. While telling me this, she became a bit teary. Her friends pick her up for meetings and events since Di doesn’t drive, or her beloved husband John will be chauffeur. She can’t do a lot of things on her own but with the help of her community network, Di is able to get out and about and contribute enormously. She is deeply grateful.

Diana and John left the UK for Australia with their two children in 1988. They came over to make a better life for themselves and provide greater opportunity for the children. Di had trained as a chef, mainly working in school and hotel kitchens. In one job she helped feed lunch to 1000 school kids every day. She brought that skill and qualification with her. They settled in Moruya where she scaled things down and ran a café for eleven years.

She first tried her hand at poker in the local club about ten years ago. It was a challenge since she can’t see the cards on the table. The dealer would say what cards were uncovered and Di had to memorise them. Despite this disadvantage, it turns out she has a gift for it. She won a ticket to a big poker meet in Goulburn a few years ago and came in fifth out of 305 competitors. Pretty impressive stuff! Some of the more serious male competitors were horrified to be beaten by this jovial blind woman with the big smile! She just recently came in on top of the Bermagui Country Club’s poker players and won a ticket to attend a game in Queanbeyan with a $50k first prize.

A few years ago Di took up painting. Seriously! She can hardly see but she is creating lovely landscapes in oils. At the moment she is working on one of a creek surrounded by green vegetation which I would happily hang on my wall. How she does it is a mystery.

As part of the CWA, she is working on feeding the volunteers at the Cobargo Folk Festival. When I arrived to interview her for this page, she was making huge amounts of pastry for the quiches that will keep the volunteers going over the Festival weekend.

Her motto of living life to the fullest and throwing herself into the activities that bring her joy is certainly working to give her that unmistakable Di Holmes twinkle. We’re lucky to be around such a generous and infectiously cheerful person. Good on you, Di! You contribute more than you realise and our community is richer for it.