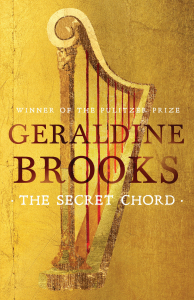 Geraldine Brooks, brings to each of her books a completely different voice, and her latest novel, The Secret Chord, doesn’t disappoint those of us who hang out for each of her offerings. Her first novel, Years of Wonder, was set in 17th century Britain, March moved to America in the 19th century, People of the Book, spanned the centuries, based in Sarajevo, then back to 17th century America with Caleb’s Crossing. Each is a gem; if you haven’t discovered this fabulous author make 2016 the year you treat yourself to each of her books – my favourite is The People of the Book. With The Secret Chord, she brings her vivid imagination to the life of King David from his time as a young shepherd, through his rise to power and his fall from grace. He is a morally complex character and hero, and through him, Brooks again draws us into an historical period of which we may not have much knowledge. I found the first sections a bit hard going – especially details of military battles, which leave me a bit cold I must confess. I skipped over some of this, and by the end of the book, she had me yet again feeling that I had really learnt about a culture that hitherto was a bit of a mystery.

The High Mountains of Portugal