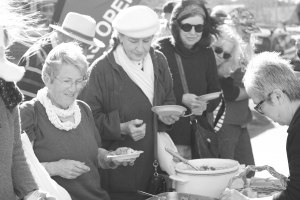 At Well Thumbed Books last month we celebrated Syrian food with a view to helping the displaced children of war-torn Syria. We raised over $1200 in not much more than an hour, feeding a pop-up crowd of very generous donors.
We were inspired by the fund-raising concept of CookForSYRIA. Their story first started as a simple supper club, where a group of foodie friends came together to enjoy Syrian cuisine and to raise money to help UNICEF protect Syrian children. Now it’s a global movement.
After seven years of war, children and families in Syria still face violence, displacement, disease and starvation, with nearly two million children living in besieged or hard-to-reach areas. Another 2.6 million children are now living in precarious conditions as refugees in neighbouring Turkey, Lebanon, Jordan, Egypt and Iraq. There is no sign that war is ending. 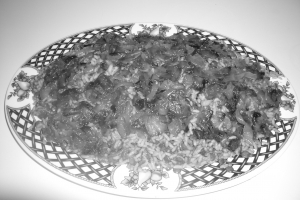 This recipe is a basic staple served regularly in the camps. Can be eaten hot, cold or room temperature, with salad accompaniments or as a side dish to other main dishes.

Rinse the lentils and place in a large saucepan with cold water. Over a medium heat, bring to a simmer then reduce the heat to low. Cook for 30 mins or until tender.
Add the bulgur wheat, stir and top up with cold water until a tablespoon stays up when inserted straight into the lentils and bulgur. Cover and leave to cook until all the water is evaporated. You can check this by inserting a knife, moving it to one side and looking at the bottom of the pan. Season with plenty of salt and freshly ground black pepper. Add a generous glug or two of olive oil and fry for a few minutes, stirring occasionally.
While the lentils are cooking, fry the onions in a large pan over a low heat with a generous glug of olive oil. Stir occasionally. Cook for at least 30 mins until caramelised. Put the Mugadara in a large dish and arrange the onions over the top.

‘A cup of this and a cup of that’ cake